v0.2! now it feels like it's getting somewhere lol

Lots of new features! (Some of which was already mentioned in the last devlog). This will be a dump of info for me and probably other devs out there that use GameMaker.

A menu system is now in place! This works off of a few scripts that are attached to an object, which I think is a good way to handle menus from now on in future projects. A set-up script handles the creation of much needed variables, including the options to choose from and which of those options is currently selected. In the Step Event, a script handles the selection of those options and additionally handles what happens when an option is selected. This can be almost anything, such as toggling on/off values or moving to a new room. Finally, the draw event handles the display of those options and the cursor. It's still messy since all of that isn't in an actual script, but because it's not it allows me to alter what is displayed for each option, such as making it display music as "Music: On" and "Music: Off". 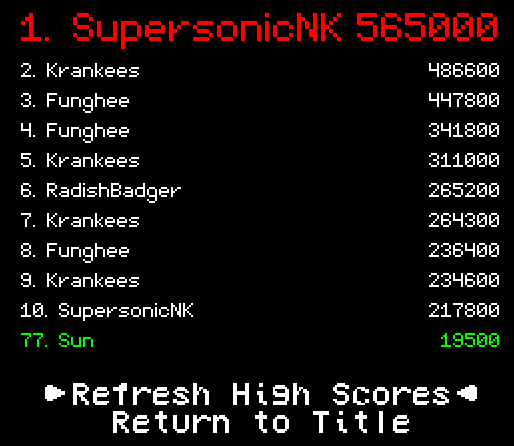 Online High Scores have been implemented, but most likely temporarily. This is done using a tutorial found here: https://forum.yoyogames.com/index.php?threads/online-highscores.4291/#post-34322. It's very good for what I consider a temporary solution for player interaction, and has definitely created some fun discussions between my friends.

The biggest feature I think that took the most work was the Costume System. This system allows me to load external sprites into a global array that stores all the sprites, which can then be called on at any moment to swap sprites on the fly. Because of the way this works, it can easily be adjusted to load sprites from any source location, which can possibly lead to modding support to allow players to load in their own costumes. As of now, there are a total of 5 costumes to find and unlock!

Some new adjustments as well!

Beyond that, there were a few bugs I managed to squash thanks to the help of my playtesters!

Finally, there's some things I NEED to change for the next update!

chasing hearts in a chaotic world