A downloadable game for Windows

This game is about a little dude on his journey to save his cat!

The mechanics of this game relies on your ability to understand how the hammer's inertia affects the player, every time you take a swing. Use it to make brave horizontal swings, daring vertical boosts, or even drive it downwards from the air to make a grand slam! Some of these are explained below:

Regular Attack - A boost in the direction the player is facing.

Up+Attack - The user swings their weapon upwards. The earlier you perform this move after a jump, the higher you go!

Down+Attack - Make a powerful hammer slam! Can only be used when in the air!

Power-Ups come in the form of "Medals", which give the user's hammer some neato buffs. They can also be stacked, upgrading the effects even more! However, you can only hold up to 3 at a time, with the oldest one getting the boot, so be sure to stock carefully!

Earth - Turns the user's Down+Attack into an Earthquake, making enemies nearby fly upwards with every strike on the ground

Fire - Leaves behind a trail of fire that damages enemies

(make sure to utilize the full potential of the Up+Attack!)

And everyone on Pokemon Showdown's Art Room! 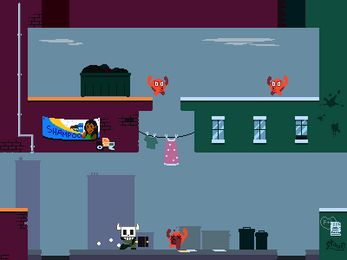